It involved mailing a postcard. The postage was about $1.80.

For backstory, I was married to a friend of mine for a while there. It fell through while I was finishing up my degree to move up to Ontario. We stayed friends for a bit, and then we didn't. I ... don't actually know what happened there, if anything did.

And now I have experienced one (1) Divorce! Life is weird.

It should be easier than it is to convince doctors to not send you to the ER.

I’m fine now; just collapsed the other day at the doctor’s office and they wanted to expensively waste my time with an ambulance.

I've been watching NGE lately, and I know why I held off -- I don't like giant robots very much -- but damn these angel designs are awesome. Sahaquiel, Matarael, Sandalphon, and Remiel are my favorites so far. I love them all.

I haven't gotten to Kaworu yet -- I'm right before Ireul, and I knew already that Kaworu only has one episode -- but I was reading through all the KawoShin fic on AO3 and then ran out and switched over to FFN. Did you know people write sexy stud Shinji with a harem in the year 2019? It's incredible, really.

I just picked up a PS4 entirely so I could replay KH3D on a big screen. I only buy consoles when there's RPGs with monster petting sims. The monster petting is obligatory.

It occurs to me I can also get the Spyro remake ....

What other good PS4 games do you all know of? Or Switch games. I liked Unraveled a lot.

They rolled out the update that lets you review your flagged images, and I apparently had two flagged posts! One was a drawing of a dragonite being fished up, and the other was this cat pic: 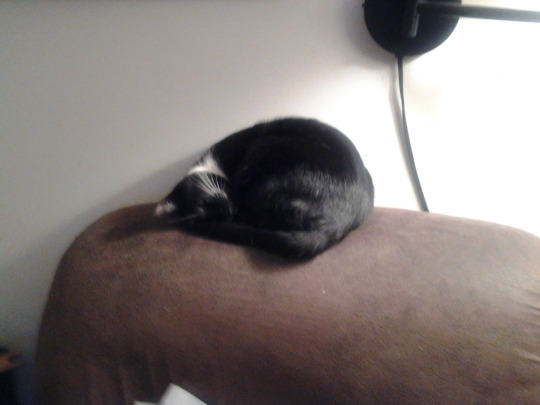 I'm still not sure how Sasha was comfortable like that, but she's a good cat all the same. Even if she is designated by Tumblr as NSFW.

Given that Aziraphale has learning what the Internet is as a New Years Resolution, and he also had a computer by 1990 which he knew how to use very well, I propose Aziraphale the computer genius stuck sometime in the 80s. He can do just about anything on his Macintosh so long as it doesn’t require more than a megabyte of memory or a 40 MB hard drive. One day, he’ll upgrade, but for now he is very happy and has trouble understanding that Crowley can be holding a tiny phone with exponentially more power than his own computer. His computer isn’t that old.

Meanwhile Crowley isn’t sure how to turn his new phone off and on, and definitely has no idea why it crashes, but he’s very proud of it anyway.

(Aziraphale edited the logo on his computer to be unbitten. He never Fell.)

Major #spoilers for both SMT Nocturne and Undertale here, obviously. I kept saying I wasn’t going to write this essay but I wrote the essay. I have stuff to say about the Undertale monsters as a parallel to manikins, as well, but it needs more percolating.

Tumblr's on fire, so I guess I'm archiving my old text posts?

Pokémon Let's Go came out a week or two ago, and me being the predictable person I am, I bought a Switch for it. Got the bundle and everything. I'm one pokémon away from completing my pokédex, and last night I (out of pure dumb luck) caught the most important of shiny pokémon! Victor the venomoth is bright blue and I love him very much.

I don't know if I would recommend this game to people who're less in love with Kanto than I am, but this game meets all my remake desires and is pretty much my Ideal Pokémon Game, barring one major control scheme issue, some nontrivial to fix graphical errors, and the selection of rideable pokémon being incredibly haphazard.

It's playable without using the motion controls so long as you play as a handheld; I find the docked version entertaining as hell but baffling and wouldn't try doing anything serious docked. It is, however, not kind to people with tendencies towards motion sickness.

Wild pokémon battles have always been a kind of borked segment of the series, and I think Let's Go removing all but a few of them is a step in the right direction. I think it went a little too far, but balancing level-up movesets is not something the series has been good with. Either some of the wild pokémon wreck your shit, or you don't get anything good for ages. Let's Go moves a lot of learnsets around so that almost every pokémon can plausibly have a good moveset by around level 30 or so, especially if you're using the TMs that you already have access to. It's nice.

In exchange, trainer battles are generally much more difficult than in the rest of the series. You can utterly cheese everything by playing two-player, but single player? They have the same access to good moves that you do and they actually use them. It's neat.

(Someone had the incredible idea that two-player should make all battles two on one. You just have a Support Trainer with you now. You casually bring your friend with you to face the Elite Four and you're going to use two pokémon at a time while they use one. I suspect the intent was so that a younger sibling or other small child can play without slowing you down too much, but it's absurd and I absolutely took periodic advantage of this.)

Honestly, my biggest problem with Let's Go is that postgame, you can fly around on your giant dragons, but your dragon gets stopped by gatehouses. Sure, you can fly all the way from Fuchsia City to Viridian City to Indigo Plateau across the Victory road, but that gate next to Viridian Forest? No, you have to go into the menu to put your pokémon back into its pokéball. Apparently you can't tell your dragonite to land so we can walk through this checkpoint. This is some dumb nonsense right here and riding a charizard, dragonite, or aerodactyl is so fucking cool that it keeps popping up and being a pain in the ass.

Oh, and you can only Sky Dash to cities, not routes. Want to ride your dragonite over Saffron City? Haha, screw you, you need to switch it out for something else in order to go anywhere else because it's surrounded by gatehouses.

Today I went around the senate building talking to around two dozen senators’ staffs, and Cardin’s staff immediately recognised us as Marylanders!

It’s because my mom had an Orioles cap on.
Collapse